Look at Nottingham today and you’d scarcely realise it has an industrial past being a one-time world leader in – of all things – lace making, bicycles and (legal) drugs.

Mark Carney, Bank of England Governor, has previously called Nottingham a bellwether for the UK economy. What he meant by that is:

“a leading example of a city which is successfully transitioning to a new, modern economy.”

Parts of Nottingham have Enterprise Zone status and are home to some incredibly exciting new start-up industries. Recently announced is an £8 million hub at the Boots’ Enterprise Zone to help research and bring new medical technologies to the market.

Nottingham is home to not just one but two universities, meaning there is always a large student population, all of which require somewhere to live. The University of Nottingham has 32,000 students and Nottingham Trent University has 25,000.

Another noteworthy Nottingham institution is the Queen’s Medical Centre. QMC is a regional ’super hospital’ and the largest teaching hospital in the UK. Six thousand people work here, creating a massive demand for property to buy and to rent. 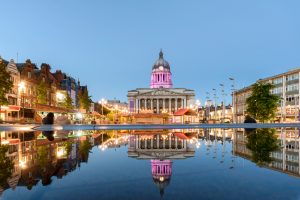 Nottingham is often described as the place that’s big enough to offer a city lifestyle (population: 329,200), but small enough to still be human-sized and personal.

Nottingham is very much the capital of the East Midlands and its biggest centre for shopping, leisure, culture and sport. The city also has a growing visitor economy with 267,000 visits a year thanks to the legend of Robin Hood and more contemporary attractions including Nottinghamshire Country Cricket Club’s Trent Bridge ground– world famous in cricket circles.

The Nottingham Express Transit or NET tram network deserves a mention too. Lines run from the city centre north to Hucknall and Phoenix Park, south to Wilford and Clifton and to Toton Lane via the university – with plans for further expansion.

Property experts tip anywhere on the future HS2 network as good for house prices. Nottingham’s HS2 station will be at Toton on the Birmingham-to-Leeds section of the line.

NG1 takes first place with an average rental yield of 11.99%

When it comes to rental yields, Nottingham has claimed both First and Fifth in Thisismoney.co.uk’s recent research into the UK’s rental hotspots. Postcode area NG1 takes first place with an average rental yield of 11.99%, with NG7 taking fifth place with an average yield of 8.89%. Property prices are also affordable in the city, averaging £152,631 and £160,269 respectively — far below the UK average of £226,906.

Centrick has been established in Nottingham for over 5 years, currently managing the largest lettings portfolio in the city and with the current regeneration projects throughout the area, have been appointed as sales agents on several high profile new homes developments in the city, details of which will be available on our New Homes page soon.

To find out more about these schemes or the city’s property market in general, get in touch with our team of experts on 0115 855 9720 or email nottingham@centrick-property.test and discover why Nottingham is truly the rising star of the UK’s property market.

How to value my land?What features do tenants want in rental properties?Centrick help to buy event – 16th June 2022Is now the right time to sell your Nottingham property?
View All

How to value my land?

Do you own a plot of land, but are not quite sure what to do with it...

We’re delighted to be hosting an exclusive Help to Buy event at our Birmingham City Centre office...

Hat-trick for Centrick as homes market continues to flourish

Centrick’s new homes team has secured a hat-trick of successes after being instructed to market three multi-million...