Up to 1.5 million flats could be unmortgageable for years to come in the wake of the Grenfell fire. As sales chains collapse and estate agents turn away as many as a third of flat owners who want to sell, everyone wants an EWS1 certificate to prove that their block is safe. Without this “external wall survey”, banks will not lend on flats. So in which buildings do you need one to buy, sell or get a new mortgage? What if you can’t get one, or worse, the building fails the check? Here’s what you need to know. 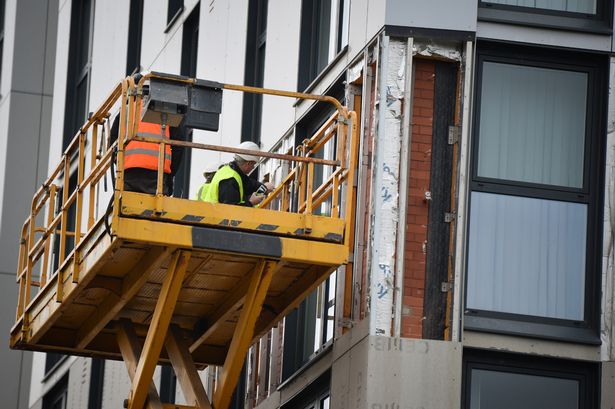 Since the 2017 Grenfell disaster, the government has tightened fire safety advice for flats. Sales started falling through when lenders required proof that buildings met the new guidance. Banks’ valuers could not perform the detailed checks needed, so they refused to say what flats were worth. Last December the Royal Institution of Chartered Surveyors (RICS) and the lender bodies UK Finance and the Building Societies Association created the EWS1 form to unblock the market. It standardises fire-safety checks for buildings taller than 18 metres (six storeys) and is valid across all flats in a block for five years. To sign the form, an expert must check that cladding, insulation, balconies and wall structures comply. It requires cutting holes to look inside walls and testing samples of materials in a laboratory. If flammable materials are found, they can stay only if the exact combination passed a test in which a three-storey model wall is set on fire.

What is the problem?

There are only 291 fire engineers who can make the intrusive checks. About 73 per cent of blocks over 18 metres and 96 per cent of those below that height still have no EWS1, according to the Association of Residential Managing Agents (ARMA), the block manager body. “Getting the EWS1 is just the start of the journey. It’s likely to give you some bad news;’ says Martin Boyd of Leasehold Knowledge Partnership (LKP), a charity. Nine out of ten flat owners who had an EWS1 got the worst rating of B2, on which banks won’t lend, an LKP survey has found. An inspection company has confirmed LI<P’s findings. Of 2,000 blocks of all heights checked by Facade Remedial Consultants (FRC), 92% failed with B2 ratings. Under leasehold law, flat owners must then pay for defects to be fixed. Average bills range from £4,000 for balconies to £29,000 for cladding, but reached £115,000 in one Manchester block. ARMA estimates that there are only 200 companies that can fix facades, a process that would take a year on a tall block. This means fixing the 2,784 blocks over 18 metres with flammable cladding – the number registered with a £1 billion government fund -would take about 14 years. You can only get a mortgage once the repairs are complete and the block passes a new EWS1 check. Until then, leaseholders are trapped. “Even if you only need a small amount of remediation, you’re still looking at a six-to nine-month wait,” Boyd adds.

A month after the industry introduced the EWS1 form for the 12,500 blocks that are over 18 metres in height, the government issued advice that brought low-rise buildings into scope. Since then, lenders have required the form even for three-storey blocks with no cladding. England has 1.5 million flats in blocks over three storeys built since 1945. Any of them could now be asked for an EWS1. Whether lenders require EWS1 forms is “just luck of the draw”, says Martin Bikhit, who runs the estate agency Kay & Co in central London. In Liverpool, City Residential estate agency says they have seen a “bit of a U-turn” in the past few months, with fewer demands for EWS1 on low-rise blocks. Despite several fires that destroyed homes in blocks under 18 metres, these buildings are last in the queue to be checked and fixed. The Peabody housing association told leaseholders in such blocks that they faced waiting up to a decade.

What are the EWS1 ratings?

The EWS1 form has five options, which all come down to one question: does the building need work? If it does, banks won’t lend. As a result, buildings with small amounts of unsafe cladding are as unmortgageable as those that are almost as dangerous as Grenfell Tower.

Only the building’s landlord can commission an EWS1 – that means the freeholder, or, if the block is run by leaseholders, the resident’s management company or right-to-manage company. They would usually get the block’s managing agent to obtain the form. Ask the agent if an EWS1 is in place and what the rating is. If the block failed, ask to see the survey on which that is based. 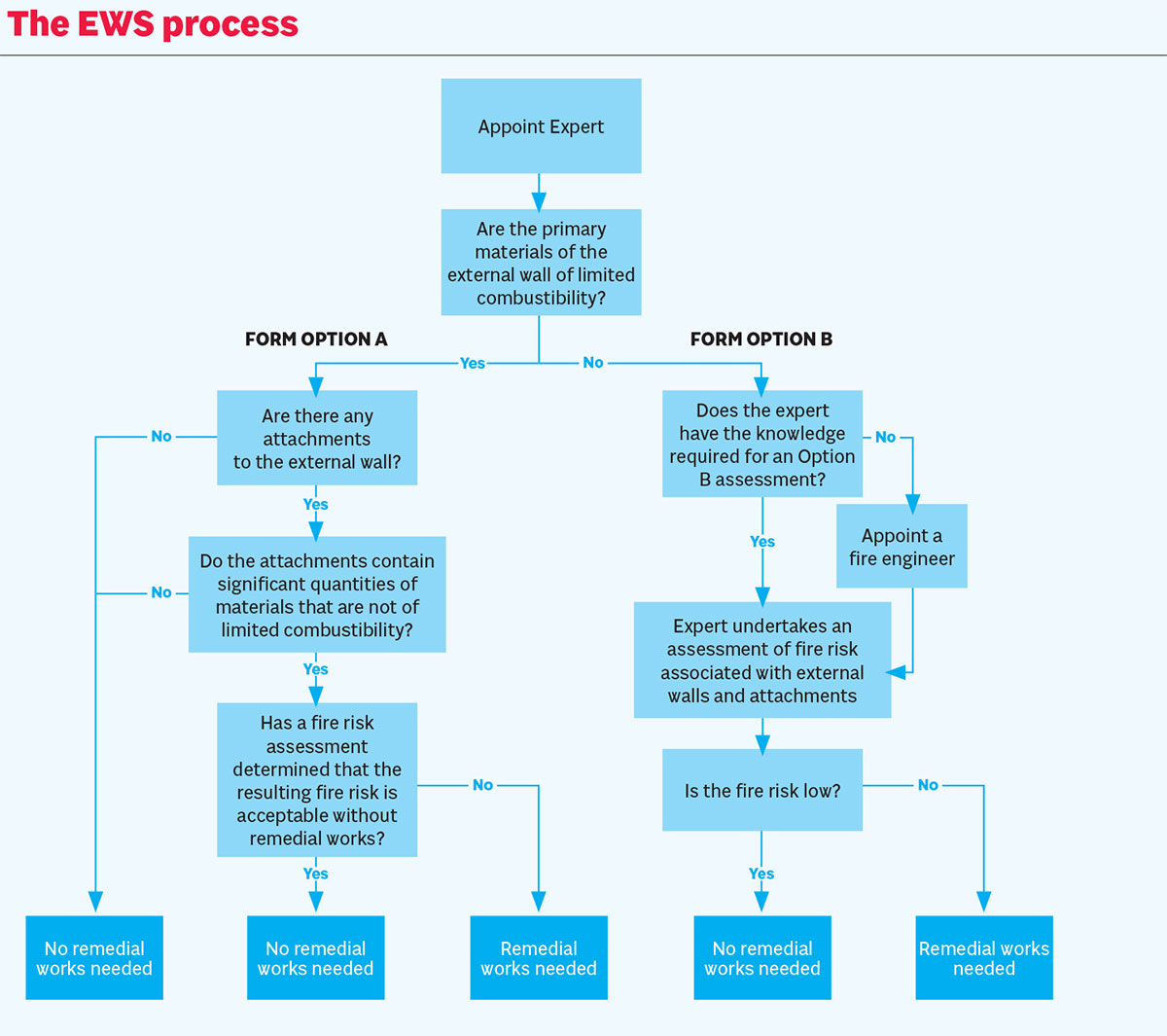 No. As a leaseholder you don’t own the building, so you cannot cut holes to inspect it, nor ask a surveyor to do so.

Can I force the building to get one?

Boyd says: “You have limited legal rights to force the landlord to carry out cladding remediation, and no right to require him to carry out an EWS1 survey. If they refuse, it’s so, so hard.” Some landlords have refused to get EWS1 surveys for low-rise blocks, because they say the form is only for buildings above 18 metres. When lenders require the form anyway, leaseholders are stuck. Remind your landlord they have a legal obligation to ensure the walls are safe and ask for evidence of what they have done, says Giles Grover of the Manchester Cladiators, a leaseholder campaign. The Fire Safety Bill will soon require landlords to check facades, but this is not the same as an EWS1 certificate.

Who can do facade checks?

An expert who is registered with rues or the Institution of Fire Engineers. They must also have public liability insurance, which many have found difficult to obtain.

How much does it cost?

Under almost all leases, the leaseholder must pay for the survey costs and the repairs. Contact LEASE, the governments leasehold advice agency, in writing to check whether your lease makes you liable. In almost every case where leaseholders have challenged cladding costs, tribunals have found they must pay, Boyd says.

Can I get government help?

The government has set aside £1.6 billion to fix unsafe flats, but it covers only flammable cladding and insulation in blocks above 18 metres. The money is expected to pay for less than a quarter of blocks that qualify. It excludes bills for balconies, structural fire­ safety defects and low-rise blocks. Ask the block manager if your building has registered with the funds and where it sits in the application process.

“If the building is less than six years old, you may be able to take an action under the Defective Premises Act 1972. Ask your landlord whether this has been considered,” Boyd says. Often, the developer’s subsidiary that built the block no longer exists, or it is too late to claim. If the block is less than ten years old, you may be able to claim for defects that breached building regulations under the new-build warranty. Seek expert advice.

If you’re unsure about anything to do with cladding or EWS1 forms, please feel free to get in touch with our team who will be happy to help in any way they can. The situation is constantly changing and we are working with both government and private sector experts to assist are leaseholders, residents and vendors wherever we can with regards to this situation. You can contact us HERE

Centrick, the Midlands-based property specialist, has further bolstered its position as the region’s leading Land & New...

Housing secretary Michael Gove has told the UK’s housebuilding industry that it must foot the estimated £4...

New Year resolution sellers gearing up for 2022 as closer to normal market beckons The price of property...