The world’s first mixed-use net zero carbon development in a key quarter of Birmingham city centre that could create more than 1,000 jobs has been unveiled by Woodbourne Group.

The £360m waterfront ecosystem, to be called Curzon Wharf, will be within eight minutes walking distance of the HS2 Curzon Street Station.

The site of 993,046 sq ft will provide mixed-use space providing up to 732 student flats, 265 residential co-living units with amenity space and up to 498 residential units.

The built-to-rent element will stand 53 storeys high making it Birmingham’s tallest building at 172m  (564 feet). The purpose-built student accommodation will be 41 storeys and the co-living 14 storeys tall.

The hybrid plans have been designed after five years of consultation with Birmingham City Council and a team of regeneration and built-environment specialists. 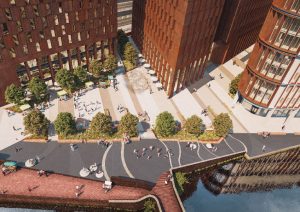 “It will act as a catalyst for the wider transformation of the Eastside area, where a number of masterplans have been earmarked which otherwise would not be possible. It signposts Birmingham’s route to delivering transformational change to the city.

“It will promote social, cultural and economic exchange in a truly transformative urban neighbourhood.”

West Midlands Mayor Andy Street said: “This is an incredibly exciting plan, with the potential to create more than 1,000 jobs at what will be a critical time for our region’s economy as we recover from the coronavirus pandemic.

“It is brilliant to see how innovative the masterplan is, not only through being net-zero and contributing towards our #WM2041 goal, but also with the life sciences element which will help create a number of high-skilled, well-paid jobs in a key industry of the future, building on the recent investment at the life sciences site in Selly Oak.

“I will support Tani and his team at Woodbourne Group as best I can as Mayor to get this scheme moving.”

Leader of Birmingham City Council, Cllr Ian Ward, said: “This exciting project will put Birmingham right at the forefront of green, sustainable development and underlines our determination to tackle the climate crisis, while also creating jobs and opportunities for people across the city.

“We’ve shown with the recent launch of Our Future City Plan consultation that Birmingham has the ambition and vision to become a more resilient, sustainable and inclusive city and Curzon Wharf shows our determination to turn vision into reality.

“We want to work with the people and communities of Birmingham as we re-imagine and reshape our city, so I would urge as many people as possible to have their say in this consultation.”

Planning and development consultants Turley and commercial property agents CBRE have calculated Curzon Wharf will add £2m a year in council tax and business rates and attract a New Homes Bonus of £4m.

Curzon Wharf is the subject of a public consultation period beginning on Friday 12 March and running for two weeks, closing on 26 March.